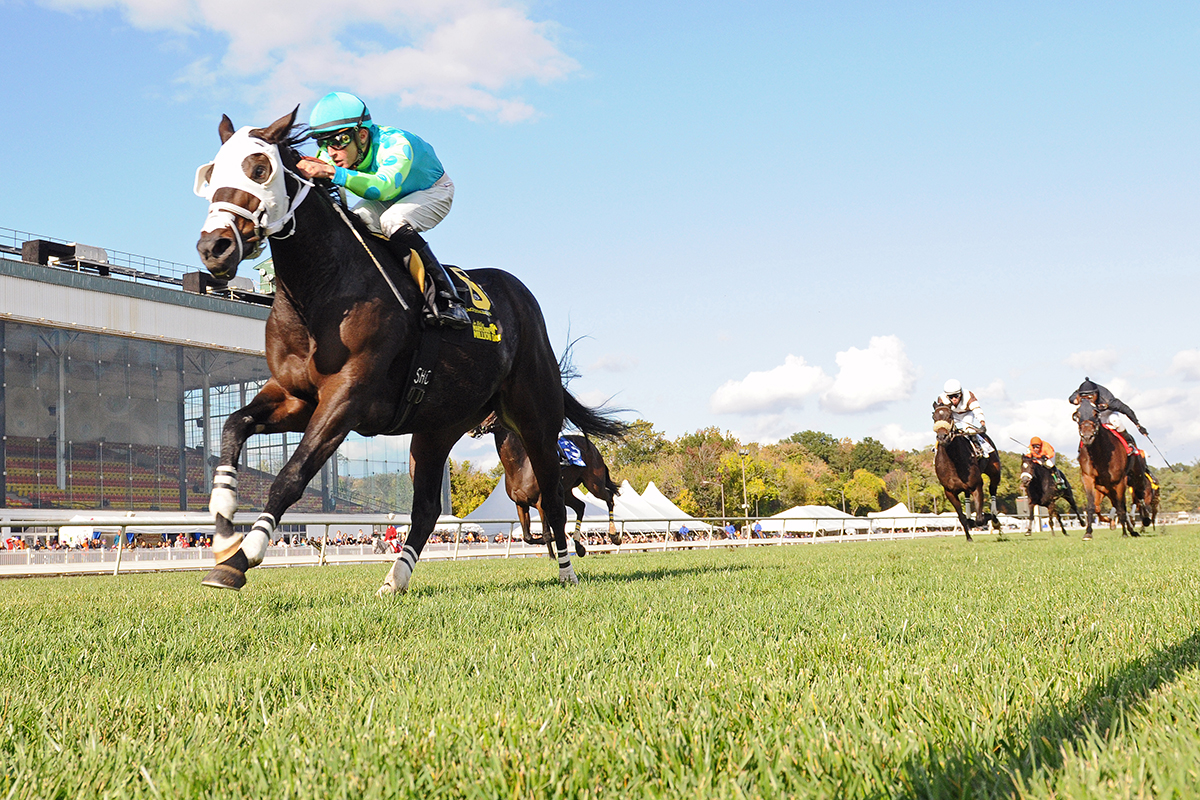 Already one of four horses to win multiple editions of the $125,000 Maryland Million Ladies, Charles J. Reed’s Monster Sleeping can join an even more elite group with another victory Saturday at Laurel Park.

Countus In (1989-91) and Mz. Zill Bear (1993-95) are the only three-time winners of the Ladies, a 1 1/8-mile turf test for fillies and mares 3 and up sired by eligible Maryland stallions, one of nine stakes on the 31st annual Jim McKay Maryland Million Day program.

“She doesn’t know that,” said Dale Capuano, who leads all trainers with 11 career Million victories, one more than Hall of Famer King Leatherbury. “The only thing she really knows is that she hasn’t won since April in her first race back. We were hoping to get some type of race that would be a little bit easier for her going into the Maryland Million, but that definitely didn’t pan out. We just have to do the best we can with what we have to work with, really.”

A 7-year-old Oratory mare, Monster Sleeping is co-second choice in the program at 4-1 for the Ladies, which drew a field of 12 including Maryland-bred also-eligibles Vielsalm, Debbie’s Tude, Good Roll and Opie.

Monster Sleeping has gone winless since opening the year with a gutsy head victory in a 5 ½-furlong optional claiming allowance turf sprint April 3 off a four-month break. She got crowded early and lost all chance in the Gallorette (G3) and endured wide or troubled trips in three subsequent stakes tries.

Most recently, Monster Sleeping failed to threaten in a 7 ½-furlong optional claiming allowance Sept. 28, run over a yielding turf at Delaware Park. She is 2-for-3 at the distance on Laurel’s world-class turf course, where she has finished in the top three in 16 of 26 starts with five wins.

“She’s as game as ever and she still trains forwardly, so everything like that is good,” Capuano said. “She just needs a bit of good racing luck. Hopefully we get a firm turf course that day because she prefers that. We’ll have to see.”

Trevor McCarthy, aboard for her last victory, will ride Monster Sleeping from Post 6. All horses in the main body of the race will carry 119 pounds.

Capuano-trained stablemate Rocky Policy is also entered in the Ladies as well as the Distaff, run over seven furlongs on the main track. In her last start, the 4-year-old Rock Slide filly won a one-mile, 70-yard allowance over the all-weather surface Sept. 19 at Presque Isle Downs.

Monster Sleeping will face three familiar foes in Pauline’s Pride, Magician’s Vanity and Dance With Gio, who finished third, fourth and sixth, respectively, in last year’s Ladies. Pauline’s Pride has one win from seven starts this year while Magician’s Vanity is coming off a fifth-place effort in the Brookmeade Stakes Sept. 24 at Laurel. Dance With Gio returned from nearly fourth months between races Oct. 8 to run sixth in a one-mile optional claimer that was rained off the turf to a good main track.

“She’s doing good. She worked very good the other day with [Maryland Million Classic contender] Flash McCaul,” said Mike Trombetta, who trains Magician’s Vanity. “She’s a little difficult filly to ride. She’s kind of eater and if you don’t get her covered up and get her comfortable, she kind of wants to go on with you.”

Complete St., second by a neck in defense of her 2015 Brookmeade victory; multiple stakes-placed Devilish Love; and Northern Smile, third by a length in the All Brandy June 25 at Pimlico, are also entered.

A winner of three straight races including back-to-back stakes, Lovable Lady is the 8-5 program favorite to make it four in a row in the $100,000 Distaff for fillies and mares 3 and older.

Though she has been worse than third just once in 14 lifetime starts including six wins, the 5-year-old Not For Love mare enters the Distaff in the best form of her career. She won a third-level optional claiming allowance going six furlongs on the Pimlico dirt June 18 and came back to post a 10-1 upset in the Aug. 20 Jameela, contested at six furlongs on the grass.

Last time out, Lovable Lady rated in mid-pack over Laurel’s sloppy, sealed main track before moving up to challenge at the top of the stretch and edging clear to a one-length win in the six-furlong Politely Oct. 1 under regular rider Horacio Karamanos, who will be aboard from Post 11 at highweight of 121 pounds.

“She was a little bit too close in the very beginning. She likes to drop back and come on, but it all worked out. When she does break on top and so close, it is hard to get her back but he did a great job. He said he only hit her twice just to go by,” Laurel fall meet-leading trainer Mary Eppler said. “She’s doing great.”

Third in last year’s Distaff, My Magician also exits the Politely where she rallied up the rail to pass horses for fourth. Eighth in the Jameela following a nightmarish trip, she set the pace before fading to fifth in an optional claimer Sept. 9.

“She’s doing good. She’s been a little off her form this year and she seems to do a little better when the temperatures aren’t so bad. Hopefully that’s been the case and she can have a chance in this race,” trainer Mike Trombetta said. “It seems that she struggles when it’s really, really hot. She kind of ran a lot better last time and it was a much cooler day. I just thought she could possibly round back into form.”

Rounding out the field are Six Tonsafun, Rockin Jojo, Scip’s Sonata, Nickrocksforpops, Rocky Policy, Pinkout, Wowhatabrat, She Rolls and Cee Bee Gee Bee. Maryland-breds Deliver Me, Moon Virginia and If I Was a Boy are entered as also-eligibles.

From a Laurel Park Press Release