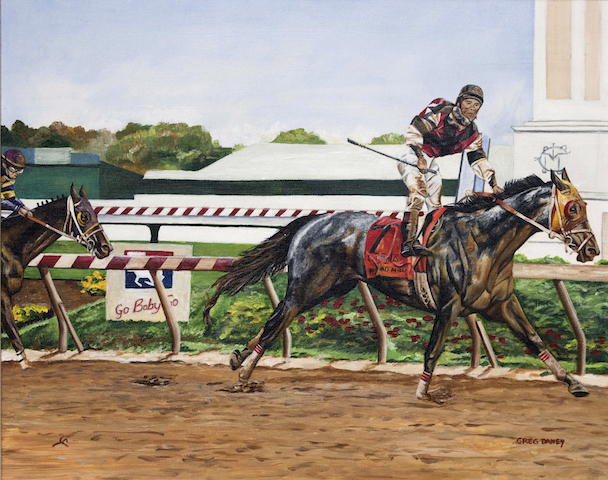 The winning piece is an acrylic on canvas of Docent (Waquoit—Dormir, by Halo) winning the 2002 Maryland Million Classic at Pimlico with jockey Jeremy Rose celebrating as they cross the wire. A three-time winner on Jim McKay Maryland Million Day (2001 Maryland Million Sweepstakes, 2002/2003 Maryland Million Classic), Docent was victorious in a multitude of stakes races and was also multiple-graded stakes placed. Docent retired to Elberton Hill Farm in Darlington, Md., after winning 16 of his 36 starts, with impressive career earnings of $802,704.

Docent was bred and owned by Mr. and Mrs. Bernard J. Daney (Black Gates Stables). He began his career under the tutelage of Kevin Boniface before moving to the barn of Tim Ritchey for his 2002 debut.

Daney is a graduate of Mount St. Mary’s College in Emmitsburg, Md. He has painted pieces for the Triple Crown, Delaware Park, Winterthur Museum’s Point-to-Point, Pan American Games and the Atlanta Braves. His paintings have been exhibited in the Kentucky Derby Museum and International Museum of the Horse.