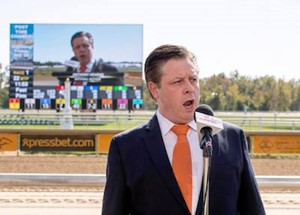 Anthony Kearns took the American television audience by storm in 1999 as the youngest member of the wildly popular musical group, The Irish Tenors with whom he has 10 CDs and five PBS specials. Their CDs have gone Gold, Platinum and Double Platinum. American critics hailed Kearns as perhaps the most likely of the three (Irish Tenors) to “achieve the level of tenor super stardom enjoyed by Pavarotti and a handful of other singers.”

Kearns hails from County Wexford, Ireland -- home of many internationally known horse-trainers such as Jim Bolger and Aidan O’Brien, and many great horse breeders, trainers, and jockeys. “That’s where I first experienced the beauty of horses, the skills of outstanding horse trainers and riders, and, of course, the thrill of the race,” said Kearns, who also sang at the 141st Preakness Stakes.

Now living in the U.S., Mr. Kearns said there are strong ties between the Irish and Americans in horse racing circles and he is proud to support the international racing community on both sides of the Atlantic. In addition to singing at high-level racing events, he frequently lends his voice to non-profit organizations supporting equine health and wellness and charities that pair retired racehorses with soldiers suffering from war trauma, such as Saratoga Warhorse in Saratoga, N.Y., and many others.

Mr. Kearns frequently performs at charity concerts, on television, in operas, and with the finest symphony orchestras in the world. He has had the honor to sing for four U.S. Presidents, the chairman of the Joint Chiefs of Staff and Medal of Honor recipients, and at the Pre-Mass concert in Philadelphia for Pope Francis. He opened the National Memorial Day Parade in Washington, D.C. – the largest in the nation -- before a national television audience and at the Memorial Day Concert on PBS. He also headlined two performances at the John F. Kennedy Center for the Performing Arts, among many concerts and appearances.

For more information, contact Kirsten Fedewa (on behalf of Mr. Kearns): 202.365.6936/ This email address is being protected from spambots. You need JavaScript enabled to view it.

The Maryland Horse Foundation’s third annual Silent Auction is now open. The auction will run until Monday, October 24 at 8:00 p.m.

CHESAPEAKE CITY, MD - True Valour (Ire), a graded stakes-winning miler who also excelled at sprint distances while racing in the U.S. and Europe, has been retired to stand at Northview Stallion Station in Chesapeake City, Md.